The North Korean Government, Lagging on SDG 3, Needs to Invest Serious Effort and Resources to Achieve Better Health for Its Citizens

In December 2019 Database Center for North Korean Human Rights (NKDB) published the report “SDG 3: The Right to Health in North Korea” as a part of a long-term program dedicated to UN Sustainable Development Goals (SDGs) and human rights. The work undertaken by the organization aimed to look into the implementation of SDG 3 (good health and well-being) in the DPRK. For the compilation of the report NKDB used both publicly available official UN data and the results of its own survey and in-depth interviews. The survey was conducted among 503 North Korean defectors who resettled in South Korea in the period between March and August 2019. Additionally, NKDB conducted in-depth interviews with nine people who used to be employed as health personnel (doctors, nurses or pharmacists) while they lived in North Korea.

NKDB’s report compares the values of SDG 3 indicators in North Korea, South Korea, USA, and Vietnam (according to official UN data), as well as the values for North Korea estimated by NKDB’s research. The analysis helps to build a more varied picture of the situation in different areas of North Korea (rural and urban). The data obtained via NKDB’s research should be used as complementary to existing SDG statistics. It is not meant to replace existing data. About 50% of the survey respondents left North Korea between 2011 and 2019, and the majority of them (87% of the respondents) are female, and in their 30s and 40s (60% of the respondents). 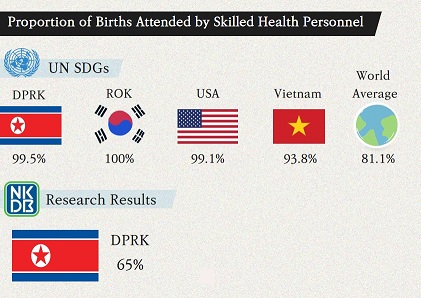 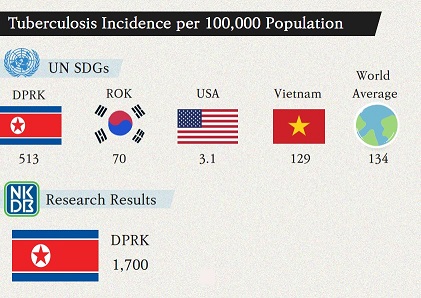 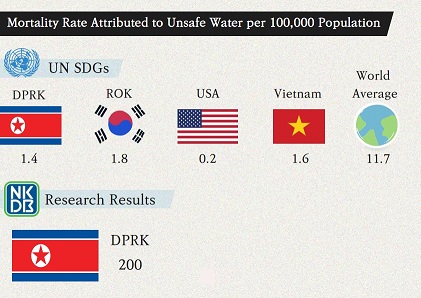 The in-depth interviews conducted by NKDB revealed a lot of details about the dire conditions in health-care facilities in North Korea’s provincial areas. There is clearly a big difference between the health care provided to state officials and the one provided to people from the general population.

Severe lack of sanitation and hygiene – Due to lack of medical supplies and electricity medical tools are not properly disinfected and are used multiple times on different patients. This is both true for hospitals in cities and rural areas and for medical procedures in detention facilities. In many cases equipment is available but the unreliable electricity supply makes the work of doctors and nurses very difficult and even dangerous for the patients exposed to the use of non-disinfected syringes and other medical tools.

In North Korea, needles are not for single use. After they are used once they are cleaned with alcohol swab and used again. People continue to get infections from this (practice). I think the most common one is tuberculosis and the second most common one is hepatitis B. Viruses are also spread and [infectious] diseases get worse. However, people [in North Korea] are not well aware of [the danger of] it. We were supposed to boil and sterilize [the needles] every time, but how is that possible? In places such as hospitals, there is no electricity so we can operate on the first patient with disinfected tools, but if there's no electricity and we can't perform disinfection we just use [the same tools] on the next patient. (In-depth Interview No. 7)

Non-reliable health-related statistics – Data associated with patient count, prevalence of certain diseases and overall hospital trends is expected to be reported to the Ministry of Public Health. However in some cases either health personnel deliberately changes the numbers in order to avoid harsh criticism by higher authority, or the state agencies themselves conceal actual statistics in order to create the illusion that the health-care system is functioning efficiently.

The statistics here (in South Korea) are accurate. It reports the actual number of patients and their diseases. But there is no news in North Korea. [The government authorities] need the numbers to gain control [over people], there are no measures for the benefit of the population. Earlier in the same year that we left (North Korea), there was a great flood, one of those that happens once in a hundred years. The entire village was gone, and a lot of people died. We asked a Ministry of State Security official. As far as we knew about a thousand people died in our area so we asked him about the number of people who were dead... He made a gesture with his hand to hush us and asked us 'Even if you know, what are you going to do?' [...] We were not allowed to speak about the people who died. Entire families were dead and we could not speak about it. The people’s unit did not allow us to talk such information could turn to criticism of society so it was kept secret. (In-depth Interview No. 9)

Failure of the section doctor system – In its ideal form the “section doctor system” in North Korea envisions that one doctor should be responsible for the health care of up to 5 families (households). In reality health personnel in North Korea is overloaded with hundreds of households and this leads to lower quality of the health care received by the general population.

One person (doctor) is responsible for 120 households. I was responsible for about 800 people of 250 households. As the number of doctors was insufficient, one person took on the work of two people. There were a lot of orders. If I was ordered to put up a notice that every household must boil water and drink it at dawn, I did it as soon as I woke up at dawn. If I were told to propagate something and get a signature, I propagated that and got the signature from the head of the people’s unit. I got very tired. I usually treated patients (at the hospital) in the morning, and went out (to make house visits) in the afternoon. (In-depth Interview No. 1)

There are official standard costs (for surgeries or treatments). You can pay in kind instead of with money. Payment can be made in cash as well. People used to pay with things like rice but since the first half of the 2000s, people have paid with money. Then since 2010, the amount of money has increased. The amount of money varied from person to person. It varied from person to person, and depended on the illness you had. If there were three doctors, they were paid differently. People got so shrewd so they don't pay the same for everybody. (In-depth Interview No. 4)

I've heard of it but I haven't seen an AIDS patient. I heard about it when I was studying, there are no doctors who have not heard about AIDS. We were not taught that there were AIDS infections in our country, but rather that AIDS occurred frequently in capitalist countries due to promiscuous sexual relations. Since our country was a socialist one we did not have such patients. That was the content of the lecture. (In-depth Interview No. 7)

Nowadays people use ice (meth) when they have a cold, backache, sinusitis, dental or nasal cavity disease. Ice acts similar to opium so I guess that's why the number of people using ice increases every day. (In-depth Interview No. 6)

Inadequate health care for the vulnerable social groups (women, children, people with disabilities) – NKDB’s research showed that on one hand the level of health care provided to pregnant women and new mothers is in many cases highly inadequate, and on the other hand the lack of money forced many women to cut their hospital stay short or to opt for abortion in the first place (which is also linked to insufficient contraception measures and awareness). The stigma associated with people with disabilities in North Korea can also be seen in the lack of health care for infants born with a disability. The low awareness of women, coupled with the lack of proper equipment in many provincial areas, leads to many cases in which health issues of the fetus are not detected prior to birth. Often parents consent to withholding medical care for infants with disabilities.

If the babies have a disability, they are either not given food until they die or are put face down to suffocate. It was like they never existed. (In-depth Interview No. 9)

There are cases in which pregnant women die after childbirth because they did not receive proper treatment. Women don’t die right after they give birth. They go home because there are no conditions for postnatal care [in the hospital]. There are cases in which they start bleeding walking home, and after continuously bleeding for 2-3 days at home they die. Most of them die from suppuration and excessive bleeding. (In-depth Interview No. 9)

The findings of NKDB’s research reveal a large number of concerns. Improvement in the indicators and targets associated with SDG 3 would ultimately mean improvement of the overall health conditions of North Korean people. Given the scale of the problems in North Korea’s health-care system, the DPRK authorities are highly unlikely to deal with these issues on their own and definitely need assistance from the international community. Better monitoring of humanitarian aid, increased transparency, decreasing the regional gaps between Pyongyang and provincial areas, and overall improvement of human rights conditions in the country are important steps that need to be taken in order to ensure the better implementation of SDG 3 in North Korea.

For more details you can download and read the full report via the following link: